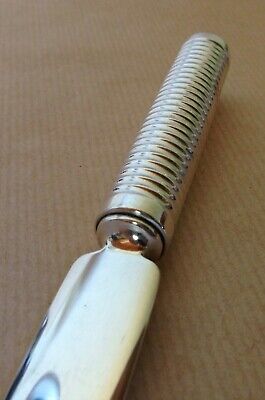 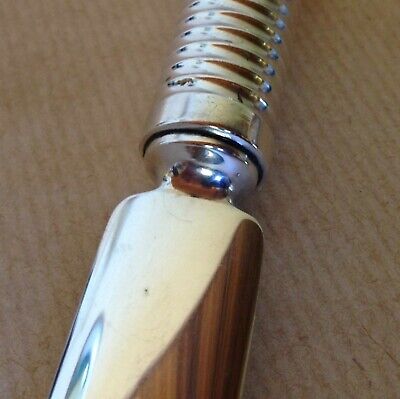 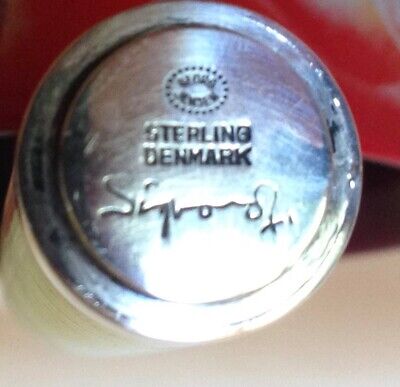 Seller: infinite_antiques_and_collectibles (894) 100%, Location: Johannesburg, Ships to: Worldwide, Item: 202823119187 !!!!! Extra Large LETTER OPENER !!!!! Georg Jensen Sterling Silver SIGVARD BERNADOTTE Post 1945 Hallmark Dimensions: Length = 227mm = 8.98 inchesBlade length = 140mm = 5.51 inchesHandle diameter = 17mm = 0.67 inchesBlade widest = 20mm = 0.79 inches WEIGHT TOTAL = 95.6 grams ( 3.37 ounces). CONDITION: Very good used overall condition. Some very light usage wear. We meticulously inspect each piece, and describe as thoroughly as possible the exact condition. I ask you to email me with your questions before the end of the auction if any of these types of issues are of concern to you. Sold as seen in the images. Images form part of the description. Sigvard Oscar Fredrik Bernadotte, Prince Bernadotte, Count of Wisborg (7 June 1907 – 4 February 2002), was a Swedish Prince prince and industrial designer.He was the second son of King Gustav VI Adolf of Sweden and his first wife, Margaret, Duchess of Scania, a granddaughter of Britain's Queen Victoria. He was born a Swedish prince and was originally titled Duke of Uppland, but was no longer authorised to use his royal titles from 1934 when he married a commoner. He was a paternal uncle of King Carl XVI Gustaf of Sweden and a maternal uncle of Queen Margrethe II of Denmark and Queen Anne-Marie of Greece.An industrial designer, Bernadotte was known for designing everything from luxurious silver objects for Georg Jensen to everyday-use household items in plastic.Among his iconic designs were the Red Clara opener; EKA Swede 38 folding knife; the Margrethe bowl; the Bernadotte jug, and the Facit Private typewriter. He also designed glasses frames.He worked as an assistant director at MGM in Culver City, California and served as a technical advisor on the 1937 film The Prisoner of Zenda.He appeared briefly in the 1968 Italian mondo film Sweden: Heaven and Hell. His work in industrial design at Bernadotte Design AB is featured, along with select items from his portfolio. Some History........Born in 1866, Jensen was the son of a knife grinder in the town of Raadvad just to the north of Copenhagen. Jensen began his training in goldsmithing at the age of 14 in Copenhagen. His apprenticeship with the firm Guldsmed Andersen, ended in 1884, and this freed young Georg to follow his artistic interests.From childhood, Jensen had longed to be a sculptor and he now pursued this course of study at the Royal Academy of Fine Arts. He graduated in 1892 and began exhibiting his work. Although his clay sculpture was well received, making a living as a fine artist proved difficult and he turned his hand to the applied arts. First as a modeller at the Bing & Grøndahl porcelain factory and, beginning in 1898, with a small pottery workshop he founded in partnership with Christian Petersen. Again the work was well received, but sales were not strong enough to support Jensen, by this point a widower, and his two small sons. In 1901, he abandoned ceramics and began again as a silversmith and designer with the master, Mogens Ballin. This led Jensen to make a landmark decision, when in 1904, he risked what small capital he had and opened his own little silversmithy at 36 Bredgade in Copenhagen. Jensen's training in metalsmithing along with his education in the fine arts allowed him to combine the two disciplines and revive the tradition of the artist craftsman. Soon, the beauty and quality of his Art Nouveau creations caught the eye of the public and his success was assured. The Copenhagen quarters were greatly expanded and before the end of the 1920s, Jensen had opened retail in Berlin (1909), London (1921), and New York (1924). Georg Jensen, (born August 31, 1866, Raadvad, Denmark—died October 2, 1935, Copenhagen, Danish silversmith and designer who achieved international prominence for his commercial application of modern metal design. The simple elegance of his works and their emphasis on fine craftsmanship, hallmarks of Jensen’s products, are recognized around the world.Jensen’s silverware achieved immediate popularity and commercial success. He was, in fact, the first silvermaker to realize a profit from the manufacture of modern silver. Until Jensen’s time virtually all successful silverware producers had relied on a standard repertory of popular traditional designs. Jensen, however, found that the market for his sleek, simple pieces was larger than anyone had predicted. His firm grew rapidly, expanding throughout Europe and opening branches in London and New York City. On both continents Jensen’s work set trends for contemporary tableware. He was among the first designers to fashion steel—formerly considered fit only for low-quality, inexpensive flatware—into handsome, serviceable cutlery. By 1935 the firm had branches all over the world and carried more than 3,000 patterns in open stock. Out of fairness to his customers, Jensen refused to discontinue old patterns, a practice common among manufacturers of fine silver and tableware. After his death the business was carried on by his son, Søren Georg Jensen. In 1973 the company became part of the Royal Scandinavia Group. Condition: Very good overall condition., Age: Post-1940, Pattern: Bernadotte, Type: LETTER OPENER, Brand: Georg Jensen